My First Trip to America 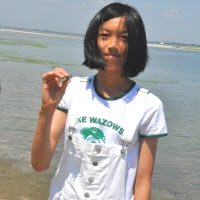 Around one month ago, we said goodbye to our parents and went to Taoyuan International Airport for a foreign trip. After having two meals and a fourteen-hour flight, we finally arrived in the U.S. Our trip began from July third. We lived in hotels in the first week because that was more convenient for us to go sightseeing everywhere. We went to the Yankee Stadium. We didn’t catch any foul ball or homerun because we sat on the fourth floor. But we still enjoy watching it.

Then, we went to Adelphi University to study for about two weeks. I enjoyed playing my part in the play class, having some delicious food in the restaurant, doing exercise with my friends, enjoying the field trip, and studying and taking notes in class. I don’t like the science class in Taiwan. However, in America, we didn’t just read books but had experiments in every lesson. For example, the concept of food web was boring, but the teachers used a rope to play a game which made it quite interesting. I learned what estuaries and water quality are from Dr. Beth. I learned how to use the microscope to watch microorganisms from Dr. Jonna . l learned how to consult my dictionary to look up some insects from Dr. Matthias. When we had trouble, our TAs, Gina and Bincy would always help us.

At the end of the courses in AU, we had a play show, which made me excited because I was glad to share what I learned from the teacher. Then, we also had a presentation. Our team, Flounders had to introduce fifteen kinds of animals. I felt terrible and stressful because every group needed to stand on the stage and introduced something we learned from the America Museum of Natural History. Fortunately, we tried our best and we made it. When it was about time to leave AU, I was happy because we were going to Disney in Orlando, but I was also sad because we had to say goodbye to everything in AU.

We spent around three hours taking the plane to Orlando. The Disney World in Orlando is the biggest one in the world. I went shopping there and they cost me little money. At night, there was a firework show. The light around the castle was a truly impressive sight. At the end of the show, everybody ran to the boat quickly because it was already eleven p.m. We had to run as soon as we can.

At last, I wanted to thank my parents. They spent lots of money to let me go there and learn something. The teachers in the camp really took good care of us. Besides them, Mr. Chang sometimes bought something to eat or drink for us. He is a kind person. I made many friends there and we promised that we would keep in touch through Facebook. I really like the regular school life here. May I stay in America longer? If I can, I will go to AU again in the future. I thought the experience made my life more colorful. It has become a beautiful memory of mine.