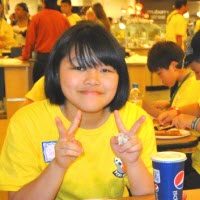 My mom always wants me to have a chance to go abroad. Fortunately, I got a chance this year. There is an activity held by THSH about traveling to America every summer vacation. My mom heard about it and she thought this is a good chance for me to improve my English.

On July 3rd, our group left for America. After a tiring flight, we arrived in America. Everyone felt exhausted and went to bed as soon as they could. The next day, we joined the celebration of Independence Day. I got a free cap and drinks! During the same week, we also went to “Six Flags” — a playground full of excitements and interesting amusement facilities, and we even watched the baseball game to cheer for “Yankees!”

After the trip to several museums, we went to Adelphi University. We studied and lived there for two weeks. The professors taught us about sea and land creatures, and tiny things inside the creatures, like DNA. Both of the presentations of ”Play class” and “Study” were held on the last two days in Adelphi. All TAs and RAs and professors and the teachers in THSH thought the show was fantastic, and we had a great time pretending to be university student.

We went to the airport immediately the next morning. Because we had to get up at about three-thirty in the morning, some of the senior students just stayed up until three-thirty! Going to Orlando was a difficult trip to us. Besides getting up very early, we also had to separate into two groups to board different planes. After the teachers gathered all of the students, we went to the basketball team’s store “Magic” for a while. Then we visited some famous places and took many pictures. On the next two days, we all stayed in “Disney” — the magic kingdom, where we can have fun and go shopping. I think that was the craziest time during the whole trip!

On the last day in Orlando, we went to NASA. Unfortunately, I caught a cold and had a fever, so I felt very bad. I was so uncomfortable that I slept on the bus almost the whole day. Thank God I got better when we got back to the hotel in New York at about twelve a.m.

On the last day of the trip, we went to the outlet. When I first saw those “brick houses” there, I felt curious and wondered why the stores are built like that. However, everything in the outlet is extremely cheaper than the goods in other department stores.

Although a twenty-three-day trip isn’t that long as it seems, it’s still a good memory to have. Not everyone has such a great chance like this, do they? I believe it will be the most precious memory in my life!