The Trip to America 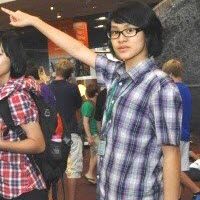 I went to America this summer vacation while others were still stayed in Taiwan and had been living the same life since they were born. Luckily, I had the opportunity to experience a whole new way of interacting with people and learning things which I’ve never heard before.

The four-week trip seems to be quite long, but it didn’t make me bored. Actually, it was too short. The cool scenic spots in America were just so unforgettable that I couldn’t help but be excited about them. We visited the Liberty Bell, the huge parade on Independence Day, Luray Caverns, the White House, United States Capitol, Lincoln Memorial……etc. All of them were just some kind of places I could only see on TV before this trip, so getting the chance to visit there in person was extremely wonderful to me.

Then we went to Adelphi University to take some lessons. The lessons we learned were “Marine Science.” Honestly, I’m not interested in the ocean and the creatures which live in it, so the lessons weren’t fun to me at all. However, I love the Play People lessons very much. I can’t act, but I like to watch other people act in their own ways. Although we haven’t studied in a drama school yet, we’re young enough to produce many creative thoughts to add into the plays. The teacher gave us plenty of room to express our own feelings and then picked up some elements that we had but didn’t notice. He guided us to improve, but still made us enjoy the freedom of performing. Also, the process to come up with a story and make it better step by step was inspiring too. Unlike the lessons we took in Taiwan, it was active and more related to us because we were the ones who made it at first. We not only had to think but also feel from our hearts.

During the days in Adelphi, we went to Time Square and watched a show in Broadway. I was used to watching movies, so the show was a little unreal to me. After that, we visited Stony Brook, which is a lot bigger than Adelphi. Stony Brook is famous for their potentials in science. What deserved to be mentioned were the field trips to the Jones Beach and the bay. Taiwan is a small island which has ocean around it. But strangely, we seldom went to the beach to have fun while we were there. Therefore, the experience to feel the wind blowing and the waves hitting your feet was just amazing! Amusing, peaceful, touching……all of the feelings combine together and make this trip more memorable.

To let me take part in this trip to America, my parents spent a lot of money. So I want to thank them for helping me broaden my horizons. Also, I’m glad that during the trip, I’ve met many kind foreigners who make my days there even better than I thought.Next time, I want to try visiting other countries and learn from the people there, whether the lessons are academic or artistic. But before that, I need to sharpen my English and other common languages skills so that I can communicate with people more smoothly.