A Beautiful Memory I Cant Forget 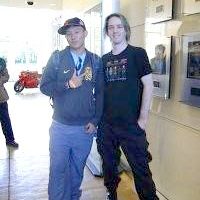 It was really a precious time for me to go to western USA in this summer vacation. It was the first time I went to the USA, so I was excited that I could learn many things in this trip.

On the first day, we spent almost 3 hours from SFO to Yosemite National Park. After I got off the bus, I took a deep breath. The air in Yosemite National Park is fresher than in any place I’ve ever been. We saw many waterfalls, and stayed in a hotel in Yosemite for one night. The next three days, we got back to SFO to visit some famous tourist attractions, like Golden Gate Bridge, Twin Peaks, and Fishermen Harbor. Before we went to California State University Monterey Bay (CSUMB), we watched an exciting baseball game. Although Giants lost the game, I still enjoyed the feeling in the stadium.

At night, we arrived at CSUMB. We had to take care of ourselves in the following two weeks. During the days, we learned some knowledge about technology (App and Robots), innovation and marine science. To learn more about these things, we also went to Technology Museum, and took a boat to find whales, sea turtles, dolphins, sea otters, and sharks. Almost every afternoon, we went to the gym called ”sea otters house” to play basketball. It was the happiest time in a day, because I found another way to meet new friends, like Mason, Nash, Johnson, teacher Seth, and Kelly.

The last theme park was Disneyland. There were four areas in the park, and it was the first Disneyland in the world. We played in “California Adventure” this time. Space Mountain and Splash Mountain would take us too much time waiting, so we learned how to use “fast pass” to save our time. At night, we watched a parade and fireworks display. The fireworks that I hadn’t seen before were so fantastic.

On the last day, we went to an outlet. I bought two pairs of basketball shoes in NIKE. They cost me almost two hundred US dollars. After that, we enjoyed our last dinner in the USA, and took an airplane back to Taiwan.I would like to thank my schoolmates and new friends for giving me a lot of happiness. I’m thankful to my school Tsai-Hsing for holding the west coast study trip for us. Thank CSUMB, the professors and the TAs for accompanying us for two weeks, and giving us such a wonderful experience of school life.

I couldn’t have experienced all these without any of you. I will keep the memories in my heart forever and ever, because you told me that these will be the best memories in my life!